Do Your Legs Ache When You Walk? 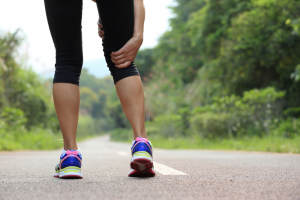 Does the pain go away as soon as you rest? If so, you may have problems with the circulation in your legs. This is called Intermittent Claudication.

Claudication is a common problem.  A cramp like pain occurs in the muscle of the legs when you exercise. It is due to a reduction in the circulation to the legs. The cause is hardening of the arteries otherwise known as atherosclerosis.  Claudication usually occurs in the calf muscles on walking. The thigh and buttock muscles may also be involved. After a brief rest the pain resolves and it is possible to walk on again. The distance walked along the flat (not up hills) before the pain starts is used as a rough guide to the severity of the condition.  During walking the leg muscles use more oxygen  which is supplied by the circulating blood.  If the arteries are narrowed, less blood gets through. When the oxygen is used up, the muscles become painful. After a rest the oxygen levels return to normal and it is possible to walk again.

These symptoms are typical.It  is often possible to diagnose claudication without any complex tests.  A simple examination of the pulses in your legs will tell me if you have a problem The blood pressure in the legs can be measured in clinic with a Doppler. If the pulses are absent or the Doppler presuure reduced, you will need an arterial duplex to confirm the diagnosis and to help me plan treatment.

The most important part of the treatment is to make sure your arteries do not get any worse. Atherosclerosis not only effects the arteries in your leg, but also those to your heart causing heart attacks, and your brain causing strokes. If you smoke it is vital that you stop altogether. You will be tested for diabetes, high blood pressure and raised cholesterol. These may require you to go on a diet or start some medication if you are not already on treatment.  If you are overweight, losing weight will help your arteries and enable you to walk further. Lastly, it has been shown that taking a small dose of aspirin (75 mgs) once a day also helps the arteries.

Regular exercise is good for the legs.  Although walking can be frustrating because of the frequent stops when the legs are painful, it is important to persist and try to walk each day, increasing the distance as the legs improve. Do not try to “walk through the pain”. Over a period of  3 – 6 months the muscles in the legs will become more efficient enabling you to walk further on the limited blood supply. In addition the blood flow in the leg will increase as smaller undiseased arteries increase in size. It is uncommon for the legs to get worse. Many patients are worried they may lose their leg but with the above treatment this is extremely unlikely and not a cause for concern.

ANGIOGRAM: this can be performed with a CT or MRI scan with some dye injected into the bloodstream, which allows the scan to highlight the arteries. If you are allergic to the dye or have reduced kidney function then this investigation may not be appropriate for you or special precautions may need to be taken.

Narrowings and blockages in your arteries can be treated by using a balloon to stretch the artery open again.  This is called an angioplasty . In some arteries the results of angioplasty can be improved by also putting a stent inside the artery. This is like an internal sophisticated “scaffold” that holds the artery open. Medication can be attached to the stent to reduce the risk of the stent being narrowed by growth of new tissue into the artery. 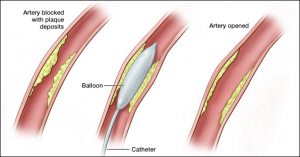 If there is a long or very hard blockage in the artery, it may not be possible to get through an perform an angioplasty.  In these circumstances, if the claudication is bad, a bypass operation will be considered and discussed with you. In some cases the risks of surgery are too high and a longer period spent exercising, losing weight etc. may be recommended.

DW, aged 83, presented with a painful left foot. He was an active gentleman, still working, but the pain in his foot was limiting his walking and keeping him awake at night. His GP recommended he see me. From his history, I was concerned he had developed critical ischaemia – a loss of blood supply to his legs. I arranged a number of urgent tests. These revealed that he had a number of aneurysms, in his legs and in his tummy. These are due to a weakness in the wall of blood vessel. These can either block off, causing a blockage to the blood supply or rupture causing massive internal bleeding. One of DW’s aneurysms had blocked.

I admitted him immediately and performed a bypass procedure to restore the blood supply to his leg. This cured the pain in his foot. Once he had recovered from this operation, he returned for an operation on the aneurysm in his tummy. We did this using the keyhole technique (EVAR). This was successful.  However, we did an xray at the end of the procedure and discovered the aneurysm in his lower leg had grown massively and had blocked off the blood supply to his foot. This required another operation. Although this was a big operation and a lot for an elderly person, we were able to save his leg. Five years later he is still active and continues to work.

If you think you may have claudication, please make an appointment to see me.

What Others Are Saying

I have worked with Miss Renton for a number of years – looking after leg ulcers. Miss Renton is very kind to her patients and has an excellent bedside manner. She explains the problem clearly and gives clear treatment plans. She is a pleasure to work with.

I had previously had treatment for my varicose veins at a clinic in Central London but it hadn’t worked. I decided to see Miss Renton. She examined me in clinic using ultrasound. She explained the problem and treated my veins with injections. It worked brilliantly this time.

I had such ugly varicose veins I no longer wore a skirt or bared my legs on the beach. A friend suggested I see Miss Renton. She examined my legs and discussed the options with me. She clearly explained the operation I needed. She even offered me a treatment slot the following day which I accepted, as I had a holiday planned and wanted my legs to be better by then. I couldn’t believe how easy it was.

I am so pleased. My legs look so much better. I am going to buy a whole new wardrobe to show off my new legs.